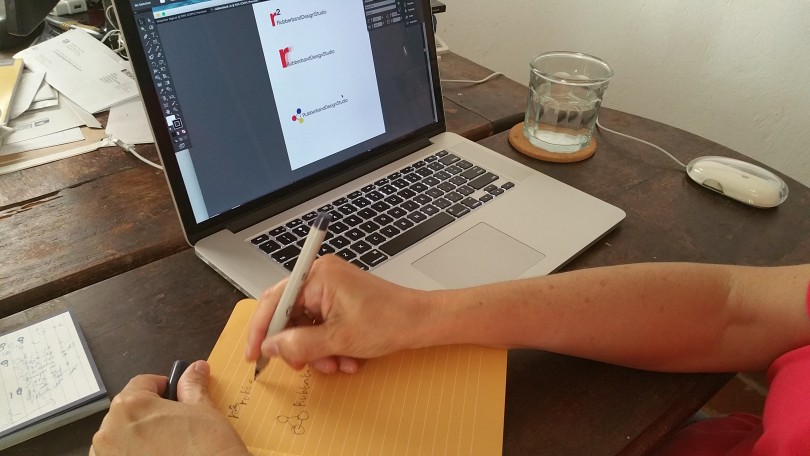 When all of the sudden one day my new laptop froze, I took it to the store where I had bought it, thinking the worst; I had tried to reboot it without any success. The guy at the store got it going it in less than 3 minutes. I asked him what he’d done, and his answer was, simply, “I rebooted it”. That’s when I realized there are are different ways to reboot, as well as definitions of the word.

That same week, in a conversation with Mari Mater O’Neill, she talked about a few things that had happened to her. I told her the story of my laptop being “professionally” rebooted, and we started to laugh: the word “reboot” applied as a perfect metaphor for what she and Rubberband Design Studio were going through at that specific moment. So, that’s how “rebooting” became such an important concept for Mari Mater, especially as the owner of Rubberband Design Studio.

One day I asked, OK, if you and Rubberband Studio are going to reboot, how about a new logo?
Maybe, O’Neill said.
With the theme of rebooting? She asked.
Maybe, I said.

We went on with our conversation and, of all the things O’Neill said, the one that grabbed me the most was “we tell stories”.

And that’s how I figured it out: two days later the new logo came about, with the talking bubbles communicating the essence of the brand. Paraphrasing Rubberband’s educational consultant, Dr. Josssie O’Neill:

Rubberband is a design firm whose work is based on people’s motivations, perspectives and experiences. When in need of a conversation, with a specific intention, we look for hubs where there is a real interaction with ideas that are prone to motivate transformative innovation and / or invention. The participants of this interaction are key collaborators for the design process from beginning to implementation.

Ergo, having a conversation through design became a natural framework for the logo’s tagline. The design aspect of the firm was reinforced by using the 3 primary colors on the talking bubbles.

But what about the theme of rebooting, you might be asking?
Well, that became the message for the creative strategy.

Nice talking to all of you.

Mariana Parreño is an art director who also writes. She studied Graphic Design and is blessed to have worked with 3 of the best copywriters in the local ad industry. She has them present in her head while writing but she never goes crazy nor they ever clash. The 3 function in perfect harmony with Mariana’s brain managing them according to the project’s needs. “I just fell in love with the written world the same way I fell in love with the graphic world: at first sight". You can say it’s kind of her Ying-yang.

Parreño has a BFA from Massachusetts College of Art & Design with a degree in Graphic Design. Prior to obtaining that degree, she had studied 1 year of screenplay writing at Emerson College. She has more than 25 years of experience in the field of Communications, and has worked at FCB, Leo Burnet and Arco Publicidad. First as art director, and often as an unofficial copywriter. Later on, Parreño became an associate creative director. She is a recipient of many awards including The New York Film & Print Festival and Premios Cúspide, and is a Cannes Festival Finalist.